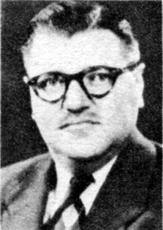 1. Who was the successful tenderer for R.R. No. 2 Whycocomagh, Nova Scotia?

2. How many tenders were received and what were the names, addresses and amounts of each tender?

Mr. Speaker, may I ask the hon. Solicitor General a question? When sitting in the opposition the hon. Solicitor General has, on various occasions, given expression to the well-known thought that federal subsidies are unconstitutional. The opinion which he voiced then was shared in every way by the government of the province of Quebec. In view of the proposed federal-provincial meeting on fiscal matters-

That was the one in November, the shadow meeting.

-could he tell us now if he would oppose the subsidies which his government seems to be preparing at this time?

Here is the answer by the Solicitor General:

Mr. Speaker, I would like to tell my hon. friend that I am still opposed to subsidies such as were proposed by the former government.

"I am still opposed." These subsidies so-called are still being paid. A slight increase has been made by the present government, but surely if a thing is wrong, to do a little more of it is even more wrong. Yet the Solicitor General, despite his capacity as a law officer, is now compounding this wrong. At that time, it was suggested by an hon. member that the question was a political one, and the Solicitor General went on:

And a political one, yes.

Since when has it become improper to ask political questions in a political assembly?

How right he was! They are not yet known, and heaven knows when they will be known!

-but I am convinced-

Though nobody knew what they were.

-that they will be made on a very different basis from those of the former government.

Then we got, of course, a small instalment precisely on the scheme of the former government. The questioning was pursued but I will not take up the time of the committee to read all that intervened. It is very interesting and can be found on pages 129 and 130 if hon. members want to read it. But I intervened-perhaps it will not surprise some of the newer members to hear this-and addressed a question to the acting prime minister, the Minister of Public Works (Mr. Green). The question I asked him was this:

I ask the leader of the government, is there any intention whatsoever on the part of the federal government to substitute something else for the equalization grants?

This was the reply of the Minister of Public Works:

We all know the way the Minister of Public Works speaks.

-I suggest that the hon. member for Twillingate-Bona vista-

Will my colleague permit me to ask a question?

Mr. Speaker, I would like to direct a question to the Minister of Justice. Having endorsed in the preface of the book called "Freedom Wears a Crown" the opinion of the late John Farthing that it is unconstitutional for a prime minister to ask within a few months of dissolution of the parliament for a second dissolution without having been defeated in the house, what will he say if the present Prime Minister intends to act in the same way Mr. King did in 1926?

Topic:   BUSINESS OF THE HOUSE
Subtopic:   REQUEST FOR ASSURANCE AS TO DISCUSSION OF ESTIMATES
Full View Permalink

say a few words on this bill, not because I am against the principle of giving a few million to the provinces since there is never too much of a good thing, but there is one limit and that is the capacity to pay. A reproach has already been made to this government for spending large amounts of money without any planning or without introducing a budget. This, in my opinion, is the surest way to drive the economy of this country into a frightful mess.

I do not intend to go back to this aspect of the question, but in presenting his resolution the Minister of Finance said that the federal government is taking too large a share of the tax dollar, while at the same moment he has asked parliament to approve an appropriation of $187 million and is boosting more than ever the spending on the part of the federal government. It is apparent that we are facing a big deficit for the present fiscal year, and I am wondering if it is sound business to redistribute the tax dollar by means of a federal deficit.

This, however, is not my main interest in this debate. What I want is clarification of a sentence used by the Minister of Finance in his speech on Monday, as reported at page 3581 of Hansard:

We respect the constitution; we are federation-ists, not centralists, and we must take into account the fact that the burdens carried by the provinces in the matters of education, highways, social services, etc. have been increasing in almost astronomical proportions.

It is evident that the meaning of centralization and decentralization has a different connotation on the government side of this house from that on the opposition side. I think it is most necessary in the circumstances to have from the Minister of Finance a clear definition of those words, which were also used by the Prime Minister, because they tried to convey the impression that the Liberal government was centralist and the Conservative government is decentralist, in other words that the present government is protecting the autonomy of the provinces.

From the implication of the many bills presented to this house in the present session it would seem that the distribution of money is, to the government, the yardstick of decentralization. In this respect I might say that the Liberal government has been decentralist to the extent of $630 million, as compared with the small decentralization on the part of the present government to the extent of only $82 million. According to a

Dominion-Provincial Relations report in the Globe and Mail of April 26, 1957 the Prime Minister, in a speech on April 25, said:

Such declarations have been repeated on many occasions, particularly during the last election campaign.

Now, Mr. Speaker, I shall quote part of a letter which was sent a few weeks ago to Quebec Conservatives and which was read by Hon. Mark Drouin, Speaker of the Senate, at the close of a dinner given by the young Conservatives.

It is from the newspaper La Reforme, for January 9, 1958. Here is what Mr. Diefen-baker says of the Liberal party:

This opponent had been in power for 22 years. Was there, in the whole of our history, a period when dissatisfaction was more widespread, to such an extent that almost all the provinces rose against it because it had turned away from the spirit and the letter of the constitution which governs us and the respect for which is essential to the maintenance and survival of your most cherished rights and freedoms?

Let me add, Mr. Speaker, that when, during the election campaign, the Prime Minister stated repeatedly that the Liberal party had drifted away from the spirit of our constitution, I do not know what he meant, particularly since everyone is fully aware that what was intended by Sir John A. Macdonald was the creation of a monolithic state, as opposed to a federation of provinces. If this is what the Prime Minister had in mind, he can be said to be indeed working in the direction of centralization, as we shall see from the following remarks:

And further on, on page 413 of the report, he says the following:

It is a completely false principle that one government should impose the taxes and another government spend them. This will always lead to extravagance.

In other pages of this report Mr. Drew contradicted Mr. Duplessis on the question of the rights of the federal government with respect to direct taxation, but never did the present Prime Minister oppose the declarations of Mr. Duplessis in 1945,. 1955 and 1957. I believe that is one of the reasons he did not discuss the problem with the provinces, but has been content to introduce a bill giving them some money. It is because he is sure Mr. Duplessis does not share his point of view. For the Prime Minister, not compromised in any way as to a definition of centralization, it is easy to say that the Liberals do not want centralization and that this is decentralization; but if hon. members will look at the facts they will realize that there are not two kinds of centralization. The Prime Minister tries to convey to the people of Quebec that he is a decentralist, and to the other provinces he says that decentralization means more money.

I think the conclusion we can draw from all this since the government took power is that there is a big difference between words and deeds; and we must reproach this government with trying to give a false impression, if not to the whole of the people of this country then at least to the people of the province of Quebec.