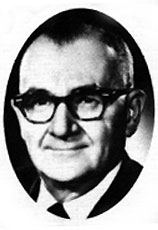 Mr. Chairman, I feel I have not strayed from the matter before us as I am actually trying to explain that we do not want that exemption to apply to American corporations. Therefore, my remarks were relevant to the debate.

Now, since the beginning of this session, we Social Crediters very often stated that the best way to promote production was not to create employment through mere incentives to production. We have always held and still hold the view that the best way would rather be to develop and give incentive to consumption.

The bill before us calls for tax exemption for foreign corporations and we are absolutely sure that somebody will have to make up for the loss of revenue it will entail. I believe it would be preferable to reduce consumers' and workers' taxes.

If, for instance, 500,000 workers in Canada obtain a tax reduction equal to the amount of money they have to spend to purchase the tools they need in their work, suppose they had at their disposal an additional $25 each, this amount by the number of workers, 500,000, would come to $12 million put back into circulation.

Mr. Speaker, it gives me pleasure to support the bill submitted by our hon. colleague from the N.D.P. I sincerely commend him for his initiative. I also assure him that I have no intention of killing his bill, I had prepared a somewhat longer contribution but I will make only a few remarks, to show him that I mean what I say. Our party is young and I believe I am the spokesman of my group when I declare that we support all sensible reforms.

The proposal of lowering the voting age to 18 is certainly most sensible and had already been submitted to our convention in 1921. Long before our party was organized, we were already in favour of such an idea.

I feel that if young people from 18 to 21 are bright enough and old enough to go to war and fight for us, they are also old enough to be entitled to vote.

I would ask the hon. member who spoke before me what he thinks of the great principle "no taxation without representation". If young people of 18 and over pay taxes to municipal, provincial and federal governments, what becomes of that principle when they are denied the right to vote?

Such discrimination should be wiped out as soon as possible. It is not possible to deny them the right to have their say in the administration of the country; they must be permitted to exercise their right to vote as they wish exactly as they have the right to order their own future.

We have the responsibility to prepare the future for our youth but I think it would be fair and logical that they could have something to say about it. One might think that I am preaching for my own party when I say that the young people generally accept new ideas. Although the hon. member who just sat down said a while ago that young people would rather deal with something else than politics, I should like him to attend a meeting of our young people in our ridings and he would see how eager they are to vote and to take part in the political life of their country. In closing I shall say that the best way to get our young people interested in Canadian politics and to make them better citizens is to give them the right to vote at 18.

With these words I end my remarks because I would like the bill to be put.

for leave to introduce Bill No. C-73, to amend the Representation Act.

My Charlevoix riding contains Charlevoix and Montmorency provincial counties, three quarters of the last one being part of Charlevoix constituency. So this bill is intended to officially designate my riding by the double name Charlevoix-Montmorency, as it is the case for the constituency next to mine, Quebec-Montmorency.

-which applies to every industry. Take for instance a man who borrows $10,000 at, say, 5 per cent and who invests the amount in a shoe store. This man puts into circulation $10,000 after undertaking to repay $10,500 a year later, when he has only $10,000. It is an impossible proposition and it goes against any arithmetic system to turn this around to $10,500, but if the man can succeed in raising the $10,500, it will be due to several factors and also because somebody else will have gone bankrupt. In other words, a debt will have been born which in turn will bear interest and so forth. The vicious circle will go widening and debts will also accumulate.

Because all money in circulation is money that has been borrowed some day or other at interest, all those who put money in circulation want to get back more than they have invested. This turns around a physical impossibility and in the end it generates overproduction and debts. I would rather say that it engenders underconsumption and consequently unemployment. On the other hand, gentlemen, one should not draw the conclusion that we are against interest on personal loans; we are not, and it is precisely because we are not against interest that we are advocating monetary reforms which would solve the problem already submitted to the house.

Mr. Chairman, let me tell the government that there is a way to solve the unemployment problem. But if they are reluctant to

face all at once the unemployment problem, they should at least try to find a solution to the problem of the unemployed.

To understand exactly what is this problem of the unemployed, one has just to compare two unemployed workers. The one is unemployed because he wants it that way. Let us suppose that due to certain circumstances, his parents left him enough money to enable him to lead an honourable life without having to work for a living, nobody will blame him for not seeking a job.

As far as he is concerned, there is no need to recall the famous law of work from the Genesis, which reads as follows: "In the sweat of thy face shalt thou eat bread" because that does not apply in his case. Our first unemployed provides for his family, he has no financial problems, he is happy and does not bother the government.

But our second unemployed is not working because he is unable to find any work. He has no money, he has to beg for a meal, and the government nearly goes broke investigating whether or not he actually is about to die of hunger; and before he is granted anything, he is warned not to ask for too much because the Bible says: "In the sweat of thy face shalt thou eat bread". That applies to him, for he can hardly eke out a living for his family. That becomes an acute problem for him, and he is an acute problem for society. However, Mr. Speaker, these two unemployed are two human beings alike, the two families are alike. The only difference between the two, luckily for the former and unfortunately for the latter, is that one has money and the other is without it.

So the logical solution for the government is to try to solve this problem by increasing the purchasing power of the latter so that both will be happy. That is the Social Credit's solution. Up to now, the other parties, including the socialists and communists, have sought an answer by taking money away from some people, through taxes, in order to give it to others. In this way, instead of distributing wealth, they distribute poverty and tend to level all social classes by downgrading them.

That is why we suggested to our electors during the last election campaign-and we are now asking the government-to introduce as soon as possible an imaginative program of which I should like to point out a few items that I feel are most urgent.

One of the reasons for our supporting this government up to now, is that we wanted to give them an opportunity to provide assistance without delay to the unemployed who

expect a great deal from the government. The survival of the government depends to a large extent on the legislation passed in the next few months.

That is why, Mr. Chairman, we on this side are asking, on behalf of the people:

2. Increased old age pensions, and the age limit brought down to 65 for everyone. Furthermore, we should like to see abolished that anomaly according to which when one of the spouses has reached the required age and is otherwise eligible for old age assistance, while his spouse is not, both are condemned to live on a pension designed for a single person. I wonder where is common sense and logic in that. We are therefore asking that, whenever the head of the family is entitled to the old age pension, his spouse, even if a little younger, be eligible also.

3. Increased tax exemptions, from $2,000 for married persons and $1,000 for single persons as they are now, to $5,000 for a family and $3,000 for unmarried people. For several other reasons, such a change is justified by the fact that the exemption, when established was to represent a vital family minimum and that any tax over and above that would be unfair and exaggerated. Now, since then, the dollar has depreciated so that what could be bought at the time for $1,000 now costs $2,000. That principle is so true that it has been recognized by the Liberal government, when it decided to grant a $4,000 exemption to members of parliament. I do not think any single member has criticized that action, which was in fact quite justified. But what is logical and good for members of parliament is just as good for workers and farmers. We are asking for such a measure but we do not want its implementation to result in increased taxation or increased debt.

I thought that this statement would have brought our main opponents, the Liberals, to refer to "funny money". When I say "our main opponents, the Liberals", Mr. Chairman, I do not mean that they are more important than the others but, since the beginning of this session, intense fire on their part has been aimed at our group, as if we were responsible for the present economic situation.

I am not complaining about those attacks; on the contrary, they have made me realize that their methods and their political tactics

are the most devious, the most hypocritical you can find in this country, which I suspected in any case.

Our English speaking friends have a nice little word to describe them-they call them "snaky". Their attitude toward us, especially during the debate in reply to the speech from the throne consisted in trying to have the public believe that they wanted an election, while we know-everyone knows it, and they know it best-that they did not want any. In fact, every Liberal who has made a speech has invited us to vote with them, but their invitation was an insult to our group. They wanted to make quite sure that we would not vote with them.

You have a good example of that in the typical speech made by the hon. member for St. Jean-Iberville-Napierville (Mr. Dupuis). It seems obvious that he is the one responsible for our education and quite often he will brand us as ignorant, using different words to that effect. Well, in his speech, in a great flight of oratory, he referred to "consignats". Mr. Chairman, I looked everywhere in Larousse and Quillet, I could not find that word. Does it mean that he is more intelligent than we are, just because he found that somewhere?