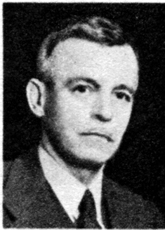 It is in the constitution.

the second reading of Bill No. 265, respecting Equitable Fire Insurance Company of Canada.

He said: Mr. Speaker, the purpose of this bill is twofold. First, it is to obtain permission to get a certificate of registration according to section 4 of the Canadian and British Insurance Companies Act and, second, to change the name of the company.

For the hon. member for Quebec West.

Mr. Chairman, the purpose of this legislation is to bring in a measure to extend the benefits of the Municipal Grants Act to municipal corporations in Canada. I for one welcome this new legislation because it will improve the former legislation. In my own constituency it will be a great help as well as to the cities which are within a short range of Nicolet-Yamaska. I refer to the cities of Three Rivers, Victoriaville, Drum-mondville and Sorel.

Since the inauguration of this legislation we have seen quite good progress within the scope of the measure. From 1950 to 1954, 48 municipalities received $3 million; from 1954 to 1955, 150 received more than $9 million. With the new legislation, 13 municipalities will get from $16 million to $20 million. I therefore do not agree with the hon. member for Greenwood when, as reported at page 1494 of Hansard, he said this:

I think the government is dealing with this in a grudging way, and that it is another instance of too little and too late. They are really just nibbling at what I consider to be a very important subject.

I assert that this measure is in the spirit of confederation. This afternoon, when I was listening to the speech of the hon. member for St. Paul's, it sounded to me like a weak echo of what we hear so often in the province of Quebec, namely that the federal government has invaded the field of taxation to such an extent that the province of Quebec is unable to raise money as she would like to do.

Let us go back to confederation. What revenues were available to the province in 1867? There were those granted by statute which today amount to something over $20 million. Secondly, there was direct taxation, and the province could raise money by direct taxation only. Thirdly, there was the disposition of the natural resources which belonged to the province. What has happened since? At that time it was not envisaged that the progress would be so rapid or that we would be met by 'a development so large that people would believe the federal government was too strong. But that is the spirit of confederation.

I wish to quote from the remarks of Sir John A. Macdonald when he spoke during the parliamentary debate on confederation:

Let me again, before I sit down, impress upon this house the necessity of meeting this question in a spirit of compromise, with a disposition to judge the matter as a whole, to consider whether really it is for the benefit and advantage of the country to form a confederation of all the provinces; and if hon. gentlemen, whatever may have been their preconceived ideas as to merits of the details of this measure, whatever may still be their opinions as to these details, if they really believe that the scheme is one by which the prosperity of the country will be increased and its future progress secured, I ask them to yield their own views, and to deal with the scheme according to its merits as one great whole.

This is my last word. I hope that in the near future we will see some other legislation which will bring relief to the municipalities and which will help education within the province. In the meantime I hope this will save the spirit of confederation, upon which attacks are made too often outside of this house.

Resolution reported and concurred in.

Mr. Harris thereupon moved for leave to introduce Bill No. 158, to amend the Municipal Grants Act.