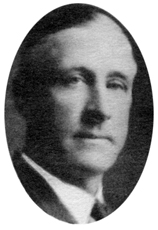 For some days now this house has been discussing one of the most important pieces of legislation ever to have come before parliament, a subject which is of vital importance not only to every Canadian but to every peace-loving nation throughout the world. The Prime Minister (Mr. Mackenzie King), speaking on the resolution, in his splendid speech outlined the proposals at Dumbarton Oaks and other international meetings and told us something of what he thought would be discussed at San Francisco. Members on all sides of the house have expressed their ideas as to what should or should not be done at this conference.

I am indeed glad, and I believe the people of Canada are proud, that the Prime Minister is to head the delegation from Canada. I am sure I am safe in saying that no one in Canada has had a greater knowledge of international affairs than the Prime Minister, nor is anyone held in higher esteem by the statesmen of the world than he. His close associations with the President of the United

States and the Prime Minister of Great Britain for so many years, and the wonderful contribution of Canada to the war, place him in high standing in the nations of the world.

There has been some suggestion in the press that he might be chairman of the conference. This would be a tribute not only to himself but also to Canada, and I know that, regardless of party affiliations, he would be the unanimous choice of the Canadian people. I am glad also that this delegation from Canada is to be representative of different political parties and I hope that the opposition members who attend will put Canada and the world first. In fact, I know they will.

While some political notes have been sounded in this debate I am sure they will all be forgotten at the conference and no one will take advantage of San Francisco to make political capital. There is too much at stake in these days for that.

We have heard a great deal about the basic things that must form a free world-security, which means freedom from fear and freedom from want. This is a kind of economic structure based on world outlook. Unless it is, I doubt very much if we can have this freedom. Then there is freedom of worship and freedom of the peoples, by which I mean an attitude of respect and cooperation toward each other, not looking down upon any race but realizing that all human beings throughout the world are entitled to the same consideration. Those are the basic things we will need for a free world, because there never was a time when we should be more careful not to make hasty decisions, without first considering the point of view of the other fellow.

I should like to emphasize this one point. We are not the people who will have to be convinced of what must be done in the future. No doubt this delegation will do whatever must be done, will accommodate itself, will work and compromise, if necessary, as long as we are moving forward toward the goal of lasting peace; but this cannot be done at one conference. You know it is very easy to go on talking about things with those who to a large extent agree with what you say, but we must go out into the world and talk to those who do not agree, and try to discover the basis of their disagreement. I hope we can unite on the basic things which all people must accept for a better world. Some speakers have suggested that the smaller nations may not be given much consideration in formulating policies for peace but that the big four, as

they are known, will have all the say. In an address made some time ago, Mr. Churchill said:

For the purpose of preventing wars there must be a world-controlling council, comprising the greatest states which emerge victorious after this war, who will be obliged to keep within certain minimum standards of armaments for the purpose of preserving peace.

However, he would not exclude all participation by smaller nations. In addition to the controlling or executive council of great powers, he added:

. . . there must be a world assembly of powers whose relations to the world executive or controlling power for the purpose of maintaining peace, I am in no position to define.

President Roosevelt seems to agree that the great powers must bear chief responsibility for the maintenance of peace. While we know Canada is not one of the larger nations she has contributed to the war effort, according to her size, more than any other nation in the world, in men, material and food, and to my mind is entitled to a high place among those making the decisions for peace. When history is written Canada will be among the first nations and the Prime Minister of Canada will be among the great statesmen of the world. On the basis of population this country stands only about thirty-fifth among world nations. We have less than one per cent of the peoples of the earth. But the catastrophe of two world wars, plus historic accidents of

geography and racial association, have hastened our economic maturity. Before the war we took pride in being the fifth trading nation of the world. To-day we are third, or second as far as mutual aid is concerned. Canada has become one of the few surplus-producing nations of the world. In a way this is no new thing. Canada has always produced far more food, materials and goods than her people could consume; but this war has vastly increased our surplus position. To put it in another way, although thirty per cent of our eligible man-power is in the armed forces our productive war capacity, expanded yet not devastated by war, is being made available to the extent of almost eighty per cent for the use and support of other than our own troops. Of a total of over nine billion dollars of war production, between six and seven billion have been made available for use 'by the other united nations. Our productive capacity, large though it may seem to us, is still small compared with the combined total of Great Britain and the United States.

Canada's early collaboration with the United States provided a pattern for future allied combined economic operations. Even when Canadian munitions production reached its peak of a quarter billion dollars a month in 1944, it represented not more than five per cent of the combined output of Great Britain, the United States and Canada. Nevertheless Canadian aluminum helped to make it possible for England to win the battle of Britain. Unprepared as we were, it was the thin but widening line of communication and supply between Canada and Great Britain which for a time weighed materially in the balance between victory and defeat. Of importance, too, is the fact that in a very real sense Canada and the United States pointed the way toward the pooling of resources of skill and brain power which has been one of the most important single factors in the success of the united nations. As far back as August, 1940, at Ogdensburg, the Prime Minister and Mr. Roosevelt reached agreement on the creation of a joint board of defence for the two countries. In April, 1941, these two leaders met again at Hyde Park to pool the resources of the two nations. Subsequently, in 1942, this Canada-United States partnership was further extended through the fact that Canada obtained top-bracket membership on two of four combined United States-United Kingdom boards created to coordinate and allocate available supplies, raw materials, shipping and food. In July, 1944, a meeting was held at Bretton Woods at which many of the suggestions put forward by Canada were accepted.

One of the most significant trade developments of 1944 was the overwhelming support given President Roosevelt in the November elections and the increased majority he obtained both in the house of representatives and the senate. It is generally expected that some time in 1945 the United States will call an economic world conference and indicate to some extent her willingness to fulfil the reciprocal trade arrangements enacted by all nations under lend-lease.

There are ways of keeping out the goods of other people in addition to building a tariff wall around a country. One of these methods is by quotas. The United States keeps out a great many Canadian cattle which we would like to sell in that country, simply by saying that our sales of cattle in any one quarter may not exceed so many thousand head. In other words, by giving us a very limited trade quota a barrier to trade is maintained and United States cattlemen are protected to that extent.

In my remarks I have tried to show that at least as far as Canada is concerned trade is an important matter in which, as a farmer, I am very much interested. We have heard it said that Great Britain will buy from us after the

war because we have shipped her so much during the war, but I fail to see it in that way. I think she will buy from the country that can supply what she wants at a price comparable with that of other countries, a price she can afford to pay; and the same will be true of other nations. We must also remember that if we are going to sell we must buy. So it behooves us as Canadians to go out and find markets for our goods, if possible, because that will mean either prosperity or poverty after the war. Canada has laid the foundation for international trade by the quantity and quality of goods she has sent to all parts of the world. Let us see to it that we continue along this way. But governments cannot do this alone. We must have the cooperation of every manufacturer and every producer of goods to supply the highest quality products and at the lowest possible cost.

On motion of Mr. Tustin the debate was adjourned.

On motion of Mr. Mackenzie (Vancouver Centre) the house adjourned at 1.1.06 p.m.

I do not think that is' quite a correct statement. When the parts come in to the implement dealers they buy them. They are responsible for the sale. It may be that what is left over after a certain period is taken back by the implement companies. [DOT]

But it comes under this

Has there been a greater quantity of these imported parts brought in since this came into force than last year? How much difference is there between importations under the new regulations and those previously?

The impression seems to be abroad that the companies have taken advantage of the situation and brought in more repair parts than they did previously. Whether that is right, I am not prepared to say. The minister should know. So far as the implement dealers are concerned, we should not leave it to them to assume responsibility for the loss; they must be protected where implements are in their hands. But it is the companies bringing implements in now that we should get after.