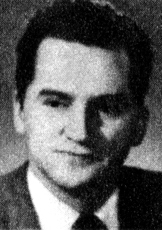 Mr. Chairman, it would be ungracious of me not to accept the kind invitation which the hon. member for Roberval (Mr. Tremblay) extended to me a short while ago. He asked what is my stand on the estimate now before us. In other words, he asked me to do what he himself did not do in the course of his remarks.

My stand on joint plans is very clear: it is the same as that of the leader of the Liberal party.

I should have liked to hear other Conservative members from the province of Quebec, the Secretary of State (Mr. Dorion), the Minister of Transport (Mr. Balcer), the hon. member for Joliette-L'Assomption-Montcalm (Mr. Pigeon), and especially the hon. member for Chambly-Rouville (Mr. Johnson).

The hon. member for Roberval has quoted an excerpt from Mr. Lamontagne's book on joint plans. I hope he understood perfectly that Mr. Lamontagne in that paragraph refers to depression and recession times. I think there is an important difference of meaning there. Perhaps the Minister of Mines and Technical Surveys (Mr. Flynn) should read this paragraph. In my opinion the difference is important.

Mr. Chairman, I should like to add a few words to those

of my colleagues concerning the $25 million which the government is about to grant to the unemployment insurance commission.

When, in 1958-59, we asked the government to admit that there was in fact an unemployment problem, we were accused then, as we have been again this afternoon, of being prophets of doom and gloom. Now, if we refer to the 1946-1957 period and determine the yearly average of the percentage of the labour force who were unemployed, we find that it did not exceed 3 per cent. I am speaking of the average per year. In June 1957, when we handed over the administration of this country to the present government, there were approximately 160,000 men and women without work. By early autumn, in that same year, there were already 225,000.

I do not wish to dwell on that question, but I would like to offer the Minister of Labour (Mr. Starr) a suggestion. Two years ago, while discussing the estimates of his department, I spoke about industrial mechanization. Our production methods are improving all the time. Some people say that automation only cuts down the number of jobs while others, on the contrary, claim that besides improving production methods, automation makes for new jobs which in many cases, are better paid.

It seems to me that efficiency in industry is today one of the main economic challenges of our time. Production is not everything. You must also dispose of your production. Since our domestic market, in many sectors, cannot consume all our national output, we must look for foreign outlets. We must then take into account the fact that we have to compete with other nations.

In their report number 8 on the advent of automation, the research services of the Department of Labour said that the impact of the technological advance on employment varies from one area to the other. Reference is made, for instance, to other jobs and to the ability of some peope to adapt themselves to other kinds of work. Reference is also made to collective bargaining and other factors.

Some people would resist automation. In my opinion, it is imperative that we adapt ourselves to the times in which we are living, and that we take the necessary steps to be able to do so. Even the most vocal advocates of industrial automation are showing some concern about the future of mankind, on account of that technological revolution now bursting upon the world, and in this country particularly.

I think we must be prepared to face a profound transitional period as well as a sort of industrial upheaval.

The deputy minister of public health in Ontario, Mr. James S. Band, said, not more than a year and a half ago, that within ten years four workers out of five would lose their jobs on account of industrial automation.

I think that from a human and social stand point, this is an almost tragic consequence.

The Canadian Labour Congress bulletin quoted also, in its February 1961 issue, the result of a study made by Mr. W. R. Dymond, director of economics and research, Department of Labour, and submitted to the Senate manpower committee.

It is a very short paragraph, but I should like to read it for the hon. members:

Even though the Minister of Labour created, within his department, a research division which studied and is still studying the impact of industrial automation, I would ask him to extend further this survey on automation.

He could ask for the opinions of representatives of management and labour, of universities, of provincial and municipal governments and agriculture, and set up a commission, even at this late date. That should have been done long ago.

I think that the committee which is now studying the question, with the best intentions in the world and the most qualified people, does not go far enough in its inquiry, apart from the fact that its staff is not large enough to do the job entrusted to it.

Social implications and effects of technological progress must be considered with the thought of what is to be man's part in that progress, and above all of what the impact of automation is likely to be on our social structure.

I know that the Minister of Labour is concerned with these questions but he seems to be the only one among his cabinet colleagues to consider this problem. He should ask people from industry to help him.

question. Canadians as a whole are particularly interested in that question.

A commission should be appointed to study the full impact of automation throughout the country, and I am sure that solutions will be submitted to it which-even if some are long term solutions-will contribute to eradicate or at least decrease to a great extent that social plague of unemployment which is a sore on our present system.

I already said on many occasions that I believe in free enterprise, but I also believe in the intervention of higher authorities whenever and wherever free enterprise cannot or does not wish to fulfil its duties.

Some companies may attach a little more importance to their profits than to their social role in the development of a country or its economy.

I urge the minister to consider those suggestions and I am looking forward to the day when, at last, concrete solutions will be found to unemployment.

I did not hear

That was the first comment I wanted to make. The second deals with the joint plans policy we adopted in 1961 and which is supported by Mr. Lamontagne.

The item discussed today is not the result of a new policy, because ever since 1951, the federal government has contributed financially to the construction of technical schools in this country. In fact if we go back a little, we from Quebec know that it was a few years before the previous government would accept that participation of the federal government and that, even when it had been accepted, some people kept on talking against those federal grants for the construction of technical schools.

We did not lose millions.