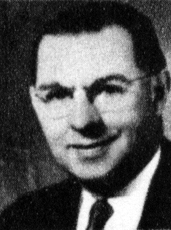 Most Recent Speeches (Page 1 of 9)

There are two main points. The first is intended to bring the financial arrangements of the Salvation Army into line with those provided for in bills already

British North America Act passed by this house affecting other religious denominations. The second purpose is to bring the province of Newfoundland under the jurisdiction of the Salvation Army board, Canada east.

There are two or three projects that I should like to bring to the attention of the minister. They concern places which are either in my riding or very close to it.

The first concerns the Bell homestead where Alexander Graham Bell conceived the idea of the telephone and where the first voices went over the wire. This building is situated on the banks of the Grand river. Due to the erosion of the bank it is necessary, or will be necessary in time, to move this building across the road in order to preserve it and keep it in proper condition.

In drawing this matter to the attention of the minister I express the hope that he will give it favourable consideration and assist us in our endeavour to retain this building as a national historic site. The federal government has recognized it through the erection of a cairn bearing a plaque, so I hope when the time comes to move the building the government will assist us to do it.

Another project to which I wish to direct the minister's attention is the Mohawk church, the first Protestant church to be erected in Upper Canada, now Ontario. On the week end I had the good fortune to visit the site with the parliamentary secretary to the Minister of Trade and Commerce. I was surprised to learn when we went to look over this historic building that it was closed because of a lack of funds with which to repair the heating system. This church was erected in 1785 for the Indians of the Six Nations who came down the Grand river to the fork in the river to worship at this church. Now, due to circumstances beyond their control, it is not open for want of the small sum required to repair the heating apparatus in the church. I believe it would be an excellent gesture on the part of the federal government to make a small grant to the church board to have the heating system repaired. I understand that the last time the building was renovated it was made possible through the generosity of a gentleman in Toronto.

A third project which is not in my own riding but in an adjacent one is the restoration of Chiefswood, the birthplace of the Canadian poetess, Pauline Johnson. The council of the Six Nations Indians, who have not very much money, have allocated $6,400 of their funds to commence this restoration project. They plan to restore the building to its original size. They will restore it to the condition it was in when Pauline Johnson lived there and they also have in mind plans for the erection of a real Indian village on the site to attract tourists to this district and show people how the Indians lived years ago.

I urge the minister to give this project serious consideration. In fact it would be better if he would consent to visit Brantford so he could see this historic site for himself. He would then have a better idea of what we have in mind.

I have to speak as a result of one or two experiences I have had in connection with this subject. I associate myself with the hon. member for Maisonneuve-Rosemont (Mr. Deschatelets) who said that he would have to vote against this bill. If a vote came now, I would do the same.

I believe that corporal punishment is a deterrent to crime, and I believe this as a result of one or two experiences I have had. I listened with interest to the hon. member when he said that, in Ontario, they have taken the strap away from the magistrate. Certainly we know it has been taken away from the school principal and the teacher. I believe that is one of the reasons we have so much juvenile delinquency in our province today. There is no doubt in my mind but what hon. members in this house, at some time or other, were chastised, perhaps rightly so, and learned a good lesson, one that they did not forget. I should like to read part of an article that appeared in a newspaper the other day. I quote:

One reason there are so many delinquents today is that their dads did not burn their britches behind them.

I think that quotation is applicable to this bill before us today. I should like to refer

also, Mr. Speaker, to an article which appeared in the Toronto Star, the weekly magazine section, written by a chap who visited Kingston penitentiary. There is one paragraph I should like to read, and it is as follows:

X also found-and surely this is strange-that whereas many men expressed regret for what they had done, they were primarily concerned with their misfortunes, their problems, their future. "The jailhouse conscience is like jelly," somebody said, and this seems to be true. For not one prisoner that I met showed any interest in or concern about the people he had robbed, cheated, beaten or killed. The one possible exception was a modern Robin Hood. "I never stole from a poor man," he said.

Now, Mr. Speaker, if the abolition of corporal punishment is going to do as much good as we have heard some members say it would today, why has it had no effect on these men who have been incarcerated? It does not seem to have had much effect on them because, although they are in prison, they have not been subjected to corporal punishment.

I recall very vividly an incident that happened some years ago. A youngster who lived not too far from me got into trouble with a gang of boys who broke into a house. He was caught and taken to magistrate's court. I was with his father when the sentence was pronounced because the man was deaf and could not hear. The magistrate said, I can either put him on suspended sentence and have him report to a probation officer or I can have him strapped. Which do you prefer? I said to the father at the time, I think the best deal here is to let the boy have a good strapping; perhaps it will smarten him up quicker than anything else. This is what happened. They boy never got into any trouble afterwards. Today, he is a father of a family and is an exemplary citizen of Brantford.

They talk about corporal punishment not being a deterrent. Some two or three years ago, there was a murder committed by four young punks here in Ottawa. This is what Judge Allan B. Fraser had to say when he was talking to an association, and I quote from a newspaper article:

Judge Allan B. Fraser said yesterday that corporal punishment was used in the case of one of the young defendants in a recent murder trial in Ottawa.

The judge of the juvenile and family court of Ottawa and Carleton, speaking to the engineers' wives association, said that while the defendants were in jail awaiting trial "they were still pretty cocky".

"Finally they used corporal punishment on one of them and it worked wonders."

The warden of a jail is empowered to use corporal punishment on prisoners if it is thought necessary.

Judge Fraser said he favoured corporal punishment "when all else fails".

"The boy came up and thanked the authorities afterwards", said the judge. "He said that if his parents had done the same thing earlier he wouldn't have been where he was."

This is just one incident, Mr. Speaker, that I think bears out the belief I have that corporal punishment is a deterrent to young people. 1 should like to refer to another article that appeared in the London Free Press, and which refers to a meeting of the law enforcement officers of Essex county. They came to the conclusion that the young criminals considered Essex county magistrates lenient and treated the suspended sentences they frequently hand out as a joke. The majority of law enforcement officers in the area are in favour of using the whip to deter young criminals.

May I call it six o'clock?

In the absence of the Minister of National Health and Welfare I should like to direct a question to his parliamentary secretary. Has the department received any complaints from Indians of ask the Six Nations reserve concerning the quality for of medical services provided at the Lady

Inquiries of the Ministry Willingdon hospital, and if so is the minister prepared to investigate the situation?