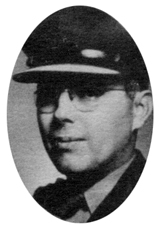 I wonder if the hon. member would mention the name of the officer?

Topic:   PRIVILEGE-MR. COCKERAM STATUS OF MEMBERS OF PARLIAMENT WHO ARE OFFICERS IN HIS MAJESTY'S FORCES
Full View Permalink

Is that not quite right?

Was there no patronage when you were in power?

Yes, it was generous treatment on the part of the former Postmaster General.

Passing from that, however, and without any desire to play politics in connection with this matter of mail contracts-keeping away from politics altogether-I should like to say a -word on behalf of the rural mail carriers of Canada. We hear very little about these people, yet I believe they are closer to the rural home life of our country than perhaps any other employees of the dominion government. We have approximately 4,500 employees operating these routes at a total cost, in round figures, of $2,700,000. I have obtained figures showing the cost per mile from December, 1922, to December, 1937. I shall not place all the figures on record, but I believe it would be sufficient to say that on December 31, 1922, the average cost per mile on mail routes was $41.37, and that this amount gradually decreased until on December 31, 1937, the average price was only $32.47, or a drastic reduction of about $9 on what might be described as very small contracts yielding small remuneration.

Of course to-day contracts are let by tender to the lowest bidder, unless, in the opinion of the department, the lowest tenderer is not in a position to carry out the contract. Naturally those people who received contracts in the good days between 1920 and 1930 received reasonable remuneration, 'because very few desired to tender. But from that date forward many persons in rural communities have suffered from a scarcity of cash and have been willing to tender on mail contracts at ridiculously low figures. For instance, I have information before me concerning a route in the vicinity of Port Elgin, running a distance of twenty-four miles, the contract price for which is $385 a year.

The mail contractor cannot carry out his contract and make a profit under such circumstances. To-day the rural population want a proper mail service. In the cities the mail carriers take the mail from the post office stations to the doors of the citizens. To-day rural communities demand the same service, and they are entitled to it. In the cities the mail carriers are under the supervision of the civil service commission and receive a stated salary, whereas the mail carriers in the country operate under a tender system. If they tender low and obtain a contract they are unable to make a profit and do not give the same efficient service they would give if they received reasonable remuneration.

The Postmaster General and his department are to be congratulated upon their desire to accommodate rural communities. We now find that they do not hold closely to the stipulation providing for six persons to a half mile, but have been reasonable in the matter and have shown a disposition to serve the people, regardless of distances. In my view that is the proper attitude to take.

I have heard several suggestions as to the amount per mile which should be paid mail contractors. However, I must be frank enough to say that from the information at hand and the agenda forwarded to me by the mail carriers' association I am unable to satisfy myself as to the exact amount that should be paid. In connection with mail contracts there are many circumstances which must be considered. One must take note of the roads, as to whether the route would be along a highway on which snow ploughs would operate or on the back roads where those services would not be given.

I believe the minister should consider appointing a committee of some kind, composed of members of the House of Commons or officials of the department, some of the mail contractors and heads of associations, to make a thorough study of the matter, in an

effort to arrive at a satisfactory settlement. I say that because I do not think the demand for mail carriers will return to the state in which it was between 1920 and 1930. I would ask that the minister give my humble suggestion his usual careful consideration. Probably, if that attention were given to the matter we might give assistance to some of the mail contractors who are endeavouring to carry out their contracts, but who find that their remuneration is not great enough and that, therefore, they are unable to give the service they would desire to give.