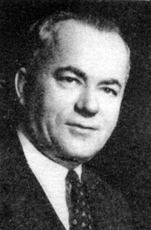 I shall, sir,
close my remarks by stating another reason for which I am opposed to this tariff wall, to this isolation of the empire in the midst of the nations of the world, it is that the last Imperial conference, in setting up this isolation, has entirely ignored the recommendations of the Lauzanne conference. At that conference an agreement was reached on the following points: that the world needed a revival of trust between nations; that the nations needed more goodwill in their mutual intercourse. The results of the Lauzanne conference were of such importance, so encouraging for the whole world that His Holiness Pope Pius XI could not help thanking God for this first ray of dawn which seemed to dissipate the dark clouds hanging on the horizon. But, sir, the very next day which followed this first ray of hope, this first sign of good omen, at the Imperial conference of 1932, Canada with the entire British Empire isolate themselves from the rest of the world. The British Commonwealth wishes to do business alone, independently of other nations. From that point of view, I state that the Imperial conference of 1932 is an incitement to disorder, because we cannot isolate ourselves from the other 53719-30
nations, without creating an unfavourable reaction. Moreover, the Imperial Conference is a denial of the recommendations of the Lausanne conference. For these reasons I deem it my duty to register my vote against the present agreements.