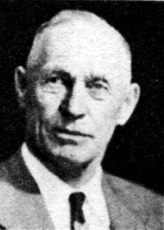 Mr. Speaker, in taking part in this discussion, first of all I may say that I am very pleased with this budget. It does not show favouritism to any particular group but, at the same time, every taxpayer benefits. It is a summing up and forecast of a business run in a highly efficient manner; and I was not surprised that our Minister of Finance (Mr. Abbott) was dubbed "the wizard of Ottawa" by New York papers.
The finance minister is the key man in the production of this budget, but every member of the cabinet is responsible to a degree for the successful operation of this business. There is one man in particular to whom I wish to refer tonight, and that is the Minister of Trade and Commerce, Right Hon. C. D. Howe. This man is responsible for our trade policy and is providing the inspiration for our economic development. He has been procuring markets for us which provide employment for everyone across Canada.
Speaking of employment, I saw an article in the Ottawa Citizen of February 26, under the heading "Employment at a high level," which said that in the week ending January 24 there were 4,533,000 persons who worked a full week. I think this is a record of which we should be very proud. Our trade policies are all conducive to increasing our business. This year, through the good efforts of our minister and his staff, a crop of one and a half billion bushels of grain is being satisfactorily marketed. We have a steady outlet for our cattle, and the best market in the world takes care of our surplus stock. This is a stabilized market. Following the outbreak of hoof-and-mouth disease in Saskatchewan last fall, this market was closed to our Canadian livestock producers. It was opened again on Monday, March 2, so we now have trade connections with the United States in that line.
We are allowed to ship 400,000 head of cattle, weighing 700 pounds and over, to the United States market each year. In addition to that we are allowed to ship 200,000 head of veal calves, weighing up to 200 pounds each, per year. The duty, which was 3 cents per pound in the early thirties, is now
2724 HOUSE OF
The Budget-Mr. Wood li cents a pound. Because of these markets, industry in Canada is quite healthy. Overall production has increased year by year, and this continual increase in production is the direct result of the atmosphere created by our government leaders under the guiding hand of our wise and kind Prime Minister (Mr. St. Laurent). As a result of this favourable atmosphere, people are working harder and producing more year by year. Our country is the envy of all countries throughout the world.
The tariff structure today is only a shadow of what it was under the last Conservative government. I can remember that in the election campaign back in 1929, one Conservative campaigner came into a hall in our district and placed on the table a cream can and a cow-bell. He commenced his speech by ringing the cow-bell; then he would ask the farmers if they were satisfied with the price of 28 cents a pound for butter and 22 cents a dozen for eggs. Of course the farmers were not satisfied, and today the farmers across Canada are not satisfied with the prices they are getting for their products. I do not blame them. It is Liberal policy to always strive to get better prices.
After the Conservatives won the election in 1930, we find that in 1933 and 1934 butter prices dropped to 14 cents a pound and eggs to 7 cents a dozen. The prices of other farm products dropped to rock bottom. I saw carloads and carloads of reasonably good cattle being processed by the packing houses in the city of Winnipeg at a price of half a cent a pound. They were disposing of their surplus stock, and canning it. In 1933 wheat dropped to an all-time Canadian low of 39 cents a bushel f.o.b. Fort William. This happened in spite of the fact that we had all the brokers in the grain exchange in Winnipeg seeking markets, as well as the then leader of the government, the late R. B. Bennett, with his professed blasting formula which failed to get any markets for our wheat.
There are hon. members in this house who will say that conditions were the same all over the world, and that is true. In those days countries were trying to be self-sufficient, just as Canada wished to be self-sufficient. I should like to point out here, however, that two wrongs do not make a right. Certainly our Conservative government, during their term of office, failed to get us any markets. Even when the United States government passed a resolution in 1934 authorizing trade agreements, our Conservative government failed to make an effort to deal with them for some of our surplus goods.