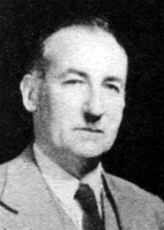 The
Quebec people voted according to their convictions and their conscience as they always do. But in 1939 when the premier of Quebec, anxious as he was to hide the shameful abuses of his administration and in his desire to trick the people into renewing his mandate, announced a provincial election under the pretext that the province of Quebec should have an opportunity of protesting against Canada's participation in the war, as approved by the Canadian parliament, our ministers in the dominion government took a very active part in that campaign. They explained to the voters of our province that our participation was voluntary and that compulsion for military service overseas would never be enforced in Canada.
At that time there were no editorials with the caption "What is the matter with Quebec?" There were no such editorials when the Quebec electors turned out of office the leader of the "Union Nationale" because of his isolationist policy. No, there were no editorials asking "What is the matter with Quebec?" Mr. Speaker, Quebec was then lauded for its good work. Let this underground effort to pit the

Mobilization Act-Mr. Healy
English element against the French Canadians come to an end, and national unity will strongly benefit therefrom.
The French Canadians do not oppose the sending of Canadian troops overseas as suggested in certain quarters. No, Mr. Speaker, they have supported that policy and they will continue to support it, but they are opposed to conscription for overseas service believing as they do that if they must fight, shed their blood and die on foreign soil overseas, they should do so voluntarily.
Before I conclude, may I say to the advocates of conscription that such a measure would not speed up our war effort but would rather tend to hamper it, that it would endanger national unity which is so essential in these critical times.
I have a last word to say, Mr. Speaker, before I resume my seat. I wish to tell the Prime Minister how sincerely I sympathize with him.
While I must vote against this bill, I still trust that with his tact, his skill and his sound judgment, he will be fortunate enough to lead us safely through the perils which now beset Canada.