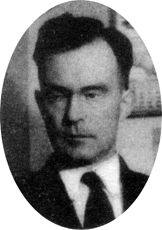 According to
the Manitoba brief submitted to the Rowell commission the income of Canada for 1934 was $3,600,000,000, to which should be added $100,000,000 received in that year by way of interest and dividends paid to Canadian capitalists by other countries. That gives us a total of $3,700,000,000. One-half or $1,840,000,000 is paid out in wages and salaries. The farmers got $440,000,000 of it, or 12 per cent. Then $300,000,000, or 8 per cent, went to the groups classified in the census as employers and workers on their own account-small merchants, home workers, fishermen, professional people with incomes from fees, and the like. The remainder of that income would go to the class of persons I have just been describing as having $297,000,000 in their savings accounts. I have pointed out several times in the house that those incomes do not come from services rendered in the production of food and clothing. They come from investments and ownership of property. So that what we are now doing is handing over the debtor class and the farmers to a group of people who are not workers or producers.
In that connection another point I should like to make is that the farmers are being given a reduction in interest rates on their mortgages. I quite approve that. But the farmers are operating at a loss. No business can operate on a basis of being unable to 71492-3091
obtain for its products the cost of operation and production. That is a state of bankruptcy, and the state in which the producers of western Canada now find themselves.