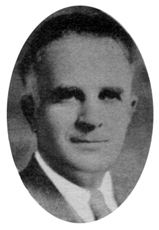 Mr. Speaker, I feel that I cannot refrain from adding a few perhaps intimate but none the less sincere remarks to those the house has
just heard from the right hon. the Prime Minister of Canada (Mr. Mackenzie King), the right hon. leader of the opposition (Mr. Bennett), the hon. member for Vancouver North (Mr. MacNeil), and the leader of the social credit party (Mr. Blackmore). Because of these eloquently worded tributes I am reluctant to add anything, and yet with the sincere appreciation I hold of Major Betts' military record-he served with the twelfth battery, C.F.A.-I should feel I was derelict in my duty if I did not add a humble and sincere word.
The returned soldiers of the house numbered just under two score-thirty-nine in all-but to-day we are thirty-eight. This is the first break which has occurred in our ranks. I attended the same school, Princess avenue in London, as Major Betts, or "Freddie," as many of us affectionately knew him, and when I recall the many months of keen suffering that he endured following the termination of the war, and remember that by a high measure of courage he recovered and became an extremely valuable member of this house, I feel that as one who was a comrade-in-arms, and who represents a constituency adjoining his own-in fact, over a score of divisions in my riding of Middlesex East pierce into the very heart of the city of London-I could do no less, and I can do no more, than in this house to pay him this humble tribute.
May I not add on behalf of every returned soldier in the house a last deep measure of sincerest sympathy to his young and charming wife, his grand old mother, and all relatives. After all, he fought a good fight; and there is always the incomparable consolation expressed in those lines of the great Athenean orator, Pericles.
They shall not grow old, as we that are left grow old;
Age shall not weary them, nor the years condemn.
At the going down of the sun and in the morning
We will remember them.
Mr. ARTHUR J. LAPOINTE (Matapedia-Matane) (Translation): On behalf of my
French-Canadian fellow war veterans, I wish to join the distinguished gentlemen who have just spoken, in voicing my deepest sorrow for the death, which happened so suddenly and in such tragic circumstances, of our lamented colleague the hon. member for London, Mr. F. C. Betts.
While attending meetings of war veterans who were members of this house, it happened quite frequently that I sat next to him and on such occasions, overlooking our differences of opinion in the political field, we often had very friendly conversations. I was thus in a position to appreciate his warm-heartedness, his great courtesy, his kindly spirit and his good breeding.
The hon. member for London will be sadly missed in this parliament.
I wish to tender my heartfelt sympathy to his sorrowful wife, to every member of his family and to the hon. members of this house who belong to the Conservative party.
Mr. JEAN-FRANQOIS POULIOT (Temis-couata): On behalf of the members of the House of Commons committee on civil service, I extend our most profound sympathy to the family of the late Major Betts and to his friends and colleagues of the Conservative party. He was a barrister of note, a gallant soldier, a parliamentarian of great experience acquired in a rather short time; he was a very able debater, and a sportsman. The floor of the house is not always a dividing line between members of opposite political affiliations; and sometimes, during the heat of a debate, I was at times the recipient of very gracious notes from the hand of the late member for London. He was a good friend; he was of genial disposition, and his passing is deeply regretted by all. On the evening before his death I happened to meet him. He took his wallet from his pocket and showed me an heirloom, containing the picture of his infant daughter in the arms of her mother. I have told the members of the House of Commons committee on the civil service that they were the finest group in the house. The late Major Betts was one of them.