Mr. Speaker, the Minister of Agriculture will deal with that question.

Mr. Speaker, I have not the

particular petition referred to. I will be glad to look into the matter when and if I receive it. However, I think the matter referred to is one which was contained in a long letter addressed to the Prime Minister and forwarded to me containing numerous but confused complaints with regard to the difficulty of a certain family group at Hays. I might say that those complaints were investigated by the local of the Alberta farm union at Hays, and the local did not seem to think there was very much in them.

A supplementary question, Mr. Speaker. The petition to which I am referring is not a family affair. It is signed by 104 farmers in that area.

Probably it is a different matter, and I shall be very glad indeed to look into it.

REQUEST FOR CONSTRUCTION OF LINE ON NORTH SHORE OF ST. LAWRENCE 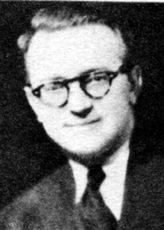 Mr. Speaker, I should like to direct a question to the Minister of Transport. In view of the statement made yesterday by the minister that the Canadian National Railways is studying a proposal for the construction of a railway line between Matane and Ste. Anne des Monts, will the minister give consideration to the construction of a railway line on the north shore of the St. Lawrence, east from Murray Bay, extending through Baie Comeau and Seven Islands, which is required because of the tremendous development of natural resources in that area?

Mr. Speaker, this government is willing to consider any sensible proposition that is put forward to it, and if the people of that area present a brief, urging study of such a project, the government will be glad to study it when it is received.

a supplementary question. May I remind the minister that this railway to which the hon. member has reference was brought to the attention of the Gordon commission and representations were made on that occasion. Therefore I think the minister can get a detailed statement of the proposal there.

Mr. Speaker, may I ask the former minister what was the attitude of the former government toward that proposal?

Inquiries of the Ministry TELEVISION

I will be delighted to answer the question.

I must declare the question out of order. It is no longer the responsibility of the former minister.