ESTABLISHMENT OF MINIMUM RATE OF WAGES FOR EMPLOYEES

the first reading of Bill No. 281, to provide for minimum wages for employees.

The purpose of this bill is to establish $1 an hour as a minimum rate of wages for all employees in Canada who come under federal labour jurisdiction. The bill provides that its terms do not affect any employee whose rate of wages is higher than $1 an hour, but any rate less favourable would be superseded by this legislation.

NEW TITLE OF DUKE OF EDINBURGH IN OPENING PRAYER

Mr. Speaker, on February 28 the hon. member for Fort William (Mr. Mclvor) asked whether a change would be made in one of the prayers which the Speaker reads at the opening of each sitting in order that His Royal Highness the Duke of Edinburgh might be referred to by his proper title.

May I ask the house if it is its pleasure to make an alteration in the prayer such as that which has been suggested by the Minister of Finance?

REQUEST FOR ANSWER TO QUESTION ON ORDER PAPER 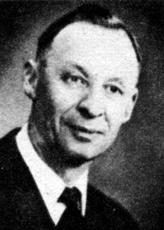 Mr. Speaker, I would like to direct a question to the Minister of Justice. When may I expect

from the minister an answer to my question on the order paper of February 12?

I must say I was not aware that the hon. member had a question on the order paper of that date, but I will look it up.

Can the Secretary of State for External Affairs answer the question today concerning the functions of the United Nations emergency force in the Gaza strip?

Hon. L. B. Pearson (Secrefary of Siate for External Affairs):

Mr. Speaker, in answer to my hon. friend's question I should like to make the following statement. The legal rights of Egypt in the administration of the Gaza strip derive from the armistice agreement between Egypt and Israel signed in 1949 and confirmed by the United Nations. If these legal rights are ignored or rejected, then the armistice agreement is violated. But the United Nations assembly has affirmed by more than one resolution, including that of February 2 which was carried unanimously, that the armistice provisions, all of them, should be scrupulously observed.

Our position, Mr. Speaker, which has been stated more than once in New York and in this house, is that the United Nations should be associated to the maximum possible extent in the administration of the Gaza strip. I regret that this was not made clear and definite in a resolution of the United Nations assembly which would have specified the arrangements to follow the withdrawal of

Inquiries of the Ministry Israeli forces. Why that was not done, Mr. Speaker, I attempted to explain a week ago today. It should be recalled also that the United Nations already accepts full responsibility for more than 200,000 Arab refugees in Gaza.

The problem then, as I see it, is to find an acceptable balance in the administration of Gaza between the practical position which the United Nations must take and the legal position of Egypt under the armistice agreement. Any such "suitable balance" in particular must give the United Nations that control of internal security in the Gaza strip necessary to enable it to carry out effectively its operations and responsibilities on the demarcation line. So far as the Canadian government is concerned, UNEF could not be expected to discharge effectively its duty of preventing raids and incursions and maintain peaceful conditions along that line if it were not in a position to carry out observations or investigations and to exercise necessary control in the strip itself. A satisfactory agreement to this effect is a fundamental prerequisite of the effective continuance of UNEF's role on the demarcation line. If no such agreement is made and kept, there will not only be renewed trouble between Israel and Egypt but the continued operation of UNEF will be prejudiced. Certainly it would be difficult for Canada to continue to participate in the force under conditions-and we hope those conditions will not materialize -in which it would not be able to discharge satisfactorily the responsibilities given to it by the United Nations assembly. We have made this position clear more than once to the secretary general and to the advisory committee in New York as recently as last week.

The secretary general is at the moment engaged in very important discussions with the governments immediately concerned. As yet we have had only a preliminary report concerning the discussions which are now going on in Cairo, but that report has been enough to cause us to question the accuracy of certain Cairo press messages about these talks.

I hope, Mr. Speaker, and I am sure the house hopes, that these discussions will clear up the difficulties that face the United Nations in this area. Otherwise the results will be serious for United Nations' action there and perhaps even for peace between the conflicting states. At the conclusion of his talk the secretary general will report to the committee of seven, of which Canada is a member, which will no doubt then consider in the light of that report whether a meeting of the full assembly is required.

force troops are being deployed along the demarcation line rather than being centred in Gaza itself?