You should revise your text.

This may cause our friends opposite to chuckle, but, as stated the other day by one of the members of the opposition, this bill confers upon the Minister of Defence Production the power to deprive labour of its right to strike.

It is not Mr. Duplessis.

That is exactly what-

He is referring to the Louiseville strike.

-is written in section 31, subsection 2, paragraph (d), that is: the minister may require any person who supplies any essential service to do it on such conditions as the minister may prescribe.

Will the hon. member permit me to ask a question?

Could he give us one instance where the Minister of Defence Production has used the powers under that section as was done by the premier of Quebec to disfranchise certain labour unions?

These words of the hon. member make me really happy, as they support the arguments put forward in this debate by government members. The only argument that was made to prove that workers would never be deprived of their right to strike- which can be done by a single order of the Minister of Defence Production-was that the minister has never used that power so far.

Well, we have been asked to include for all time in our statutes a clause which would enable the Minister of Defence Production to issue an order, for instance, that the workers of any industry, of any manufacture, of any public services or of any group of workers who perform certain services-

-that are essential will not have the right to strike if the services they perform are essential. I am sincerely wondering whether this can in any way contribute to the advancement of happiness and welfare among our workers? I am putting the same question to the hon. members opposite who were chosen during the last election by proclaiming themselves the friends of labour throughout Canada. I heard them in my own county, coming one after another to tell us that the Liberal party offered the best protection to the Canadian workers. Well, today those same representatives are ready to support such a bill, which is going to be incorporated once and for all in the statute books of our Canadian parliament. The only excuse they can find for including such a drastic measure is that the government never resorted to it. But what if the minister did decide to use it? Nothing can prevent him, not even the absence of a state of emergency.

Therefore, I said at the outset of my speech that the battle now being fought by the leader of this party and my colleagues is for the preservation of our democratic freedoms, to make sure that there will be nothing in the statutes of this country which could allow any sabotage, now or later, of the Canadian constitution in the first place, and of the rights of the workers and of all other individuals. In my opinion, we would be really remiss in our duty if we allowed such a piece of legislation to be included forever in the statutes of this country.

The bill in its present form is rather shy of explanations. There is hardly more than a paragraph repealing the part which has to do with the time limit. I submit the government should be satisfied that the Conservative opposition will never allow such a bill to pass in its present form.

The government should meet without delay to consider the situation and find a way to break the deadlock. We certainly do not wish to let them take hold of what we

believe to be essential to the survival of our parliamentary system. We did our share, we proposed an amendment which treated the minister very generously. We want Canada to have a Department of Defence Production, and the minister to hold all the powers which he needs to administer the department on a truly democratic basis.

I challenge anybody to show me in the amendment put forward by the member for Royal the slightest justification for any reflection upon the intentions of our party in that respect. I urge the government members who have listened for many days to the speeches made by the opposition- 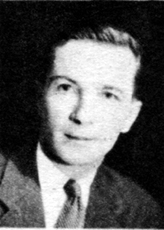 Who are listening out of sheer courtesy.

-to approach their ministers urging them to call a caucus of the Liberal party, during which g suggestion acceptable to this house might be worked out, particularly in view of the speech in which the Leader of the Opposition so clearly and distinctly stated-

So lengthily and obscurely.

-the policy of our party in this matter, which is all to his credit as a democratic parliamentarian-and this applies also to all hon. members of the Conservative opposition. I trust the government, even abetted by the silence of its backbenchers, will not succeed in convincing the opposition to incorporate such anti-democratic legislation-not for a single year, but forever- in the statutes of our Canadian parliament.

Mr. Speaker, having a feeling of solicitude for those not quite so fortunate as we are, having heard the hon. member for Digby-An-napolis-Kings (Mr. Nowlan) intimate the other day that this debate would carry on until the snow flew in the fall, and having noticed that some hon. members opposite are considerably irked by the heat, I thought I might refer to an article which appeared in the Globe and Mail of July 5 entitled "Advice from MOH". It goes on to say:

Here is what to do when mercury high.

There are quite a number of suggestions in this article, and if hon. members do not wish to hear them probably I might call it six o'clock.