Mr. J. A. Blanchette (Parliamentary Assistant to the Minister of National Defence):

Mr. Speaker, in the absence of the Minister of National Defence (Mr. Campney) I shall take the question as notice.

Mr. Speaker, in view of the rapid drop in the price of lamb on the Toronto market I would like to know if the Minister of Agriculture would give us something further, as he intimated yesterday he would, when he said he would have more information today regarding the importation of New Zealand lamb.

Mr. Speaker, the Acting Leader of the Opposition asked his question yesterday and at that time I could only say that the matter had not been brought to my attention. When I returned to my office I found there a letter, which I presume is similar to the one he received, from the livestock people in Toronto. I have checked up since that time, and I wish to give this information to the house.

The Canadian lamb market has been steady to strong at $23 to $23.50. The average price for good and choice lambs at Toronto for January a year ago was $23.26.

Canadian lamb prices are substantially higher than prevailing prices in the United States. The price for good and choice lambs at Toronto was from $2 to $3 higher than Chicago prices. During the week ending January 27 the average price for good and choice lambs at Chicago was $19.90 as compared with $23.21 in Toronto. Owing to the strength of the Canadian market and the difference between Toronto and Chicago markets for lamb, some 450 head of live lambs have been imported from the United States this year to date.

In view of the strength of the Canadian lamb market it can hardly be argued that the importation of New Zealand lamb has seriously depressed prices, but it would seem inevitable that there would be some softening of Canadian prices to bring them into a more comparable level with U.S. prices.

There is no prohibition on the importation of lamb into Canada. The only government regulation is the imposition of a duty-i cent per pound for New Zealand and Australia- and anyone may ship lamb into this country who is able to do so over the duty. Since there is no government control there is no occasion for the government to seek or obtain advice from exporters or importers as to their operations or intentions with respect to lamb shipments.

Imports of New Zealand and Australian lamb and mutton for recent years are as follows:

Inquiries of the Ministry During the early part of January of this year one shipment of about 250,000 pounds of New Zealand lamb was imported.

I would like to ask a supplementary question. Was the minister not aware that the market had dropped from 23 cents to 19 cents in Toronto?

This report indicates that the price in the United States is $19.90 a hundredweight in Chicago and $23.21 in Toronto. There would naturally be a levelling off of the prices of lambs here on account of imports from the United States.

Why? We do not need to have our prices fixed there.

There is a duty of 7-5 per cent. It would come in over that duty.

REQUEST FOR COMMENT BY MINISTER ON SPEECH IN WESTON

I should like to ask two questions of the Minister of Finance. Was he correctly reported as saying in a speech at Weston last Thursday or Friday, referring to the tax rate:

Unless we can find ways of lowering the defence expenditures there won't be much change.

Second, if so, do the estimates he tabled last Friday indicate a sufficient lowering for this purpose?

Speaking at Weston I made the point, made by many persons discussing the financial position of the government of Canada, that the two large items of defence and welfare were the ones which gave the greatest possible scope for reduction in spending. I drew no conclusions as to which could possibly be reduced, or should be reduced. And, so far as the future is concerned, the budget will no doubt disclose whether these cuts have been sufficient for the purpose of cutting taxes.

May I ask the minister if he would be good enough to answer my questions?

The house resumed, from Monday, January 31, consideration of the motion of Mr. Yves Leduc (Verdun) for an address to His Excellency the Governor General in reply to his speech at the opening of the session, and the [Mr. Gardiner.} 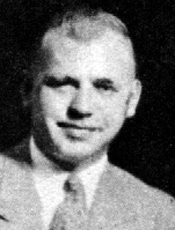 Mr. Speaker, when I moved the adjournment of this debate last night I was discussing the matter of tariffs and their effect upon our economy, and had pointed out that if the United Kingdom lost her wool markets in Canada she would lose $30 million annually in Canadian currency with which to buy our products.

Reference in this debate has been made by opposition members to the decrease in exports to the United Kingdom, particularly in relation to farm products. In this connection I believe consideration should be given to the prices at which these products are laid down in the British market by various countries as compared to the relative wholesale Canadian prices of these products.

The figures I propose to quote are for the month of February 1954, and the prices in England are landed cost excluding duty.