for leave to introduce a bill respecting the discontinuance of a line of railway by Canadian National Railway Company, in the city of Oshawa, in the province of Ontario.

Shall the hon. member have leave to introduce the said bill?

I think I should point out to the house that this is a bill which should not be introduced by a private member. It seeks to indicate a line of conduct to the Canadian National Railways in the city of Oshawa. It is a bill that will require the expenditure of money to implement what is being suggested, and it is contrary to the terms of the British North America Act. With respect and deference, I submit that no private member has the right or privilege to indicate to the Canadian National Railways what it should or should not do.

I have to declare the bill out of order.

Mr. Speaker, I wish to direct a question to the Minister of Finance. I have not had an opportunity to give him notice of it, but I think he will be able to answer it later in the morning. The question is with respect to the refunds of compulsory savings that took place last month. Originally the interest rate was set at two per cent, and the amount deducted during 1943, it is represented to me, should have earned interest for five years and two months. I understand it was figured at a flat rate of nine per cent. The 1944 savings were stopped on June 30, 1944, so that interest should be earned there for four years and eight months. In that case I understand that interest has been figured at a flat rate of seven per cent. This complaint is from a small holder who feels that the government has not 29087-178i

played fair. I think it is desirable that the question should be answered. I will give further particulars to the minister if he so desires.

I am sure my colleague the Minister of National Revenue (Mr. McCann) will ask his department to look into the matter. Refunds, of course, are made by that department.

asked the Minister of Justice a question previously about the riots at the Collin's Bay section of Kingston penitentiary. I should like to know now whether the minister is in a position to give a report on the situation in this institution. Too much secrecy is observed by the officials, and in the interests of order in all these penal institutions I think that a report should be forthcoming.

I have no hesitation whatever in making a report. The reason I did not do so before was that it would traverse a good deal of the ground that had already been adequately covered in the press statement that was issued by the commissioner of penitentiaries. In view of the position taken by the member for Lake Centre, perhaps I should read the full text of the interim report which I have from the commissioner, dated April 27, 1949. The text is as follows:

On Easter Monday April 18 a group of convicts at Collin's Bay penitentiary staged a noisy disturbance which resulted in damage to cell equipment and furnishings and to windows estimated at $900.

A small group in one of the cell blocks commenced to shout and break up their cell furnishings about 4.45 p.m. The demonstration was immediately taken up by some fifty convicts quartered in an adjacent temporary dormitory, most of whom were employed in the steward's department. These convicts proceeded to break up their furniture and the windows in the dormitory and gained possession of a small fire hose in the dormitory, causing some water damage. Additional officers were immediately brought to the scene of the disturbance, and within half an hour the ringleaders of the disturbance were segregated and placed in dissociation cells. The remainder of the convicts involved then obeyed orders and the disturbance subsided. Later, eight convicts in the cell block again began shouting and endeavouring to incite their fellow convicts to continue the demonstration. They were immediately

Inquiries of the Ministry charged with a prison offence, and after trial before the warden who had consulted with the commissioner of penitentiaries by telephone, they were sentenced to from five to ten strokes of the strap as a corrective measure, and this punishment was then inflicted. As a result of this action no further trouble developed, and the situation at the penitentiary has continued quiet and normal since.

The total number of convicts who participated in any way in the disturbances totaled eighty-five, and the offenders have been dealt with under the penitentiary regulations in varying degrees according to their guilt.

No one was injured in the disturbance, except one convict who cut his hand while putting his fist through a window.

The cause of the disturbance is still being investigated, but some convicts have stated that they expected extra food for Easter. The evening meal served on Easter Monday was examined by the senior officials of the penitentiary, and was found to be adequate and palatable. The majority of those who took part in the disturbance were employed in the penitentiary kitchen, where recent changes have been made to improve efficiency and discipline. It is thought that a few malcontents may have organized this demonstration to show their resentment at these changes. 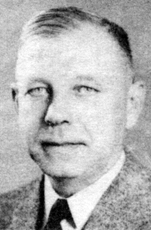 I should like to direct a question to the Minister of Veterans Affairs. I am sorry I could not give him notice of the question, but I tried to reach him this morning. My question is based on a letter which I received from one of my constituents. Is it true that a definite adjustment might be made by the Department of Veterans Affairs in connection with the contracts of the veterans of the first world war, and that the remainder of these old contracts will probably be cancelled?