Right Hon. IAN A. MACKENZIE (Minister of Veterans Affairs) moved: That the name of Mr. Power be substituted for that of Mr. Langlois on the special committee on redistribution. Motion agreed to. Inquiries of the Ministry

APPOINTMENT OF COMMITTEE TO CONSIDER CONTROL AND DISTRIBUTION

That a select committee be appointed to inquire into and report upon the control and disposition of canteen funds accumulated during the war which commenced on 10th of September, 1939, out of profits arising from army messes, canteens and other services operated by or for the benefit of army personnel, as well as moneys derived by units through the sale of refuse, and other moneys received for the benefit of personnel of the Canadian army, and to recommend to the house appropriate legislation to implement such recommendations as the committee may make, with power to send for persons, papers and records, and to print its proceedings; and that the provision of section 1 of standing order 65 be waived ;n respect of this committee: and that the said committee consist of the following: Messrs. Baker, Belzile, Beni-dickson, Castleden, Cleaver, Cockeram, Croll, Cruickshank, Dion, Emmerson, Fulton, Halle. Harris (Grey-Bruee), Harkness, Langlois, Leonard, Marshall, Mutch, Probe, Robinson (Bruce), White (Hastings-Peterborough), Whitman, Winkler.

Topic:   APPOINTMENT OF COMMITTEE TO CONSIDER CONTROL AND DISTRIBUTION
Permalink

Mr. Speaker, I rise to a question of privilege. My attention has been drawn to the following sentence appearing in the issue of Maclean's Magazine for November 15, 1946:

The "Independant Liberal" is Jean-Franqois Pouliot, regarded by the government as one of its most implacable enemies.

I should like to know if such a statement has been made by any cabinet minister to any gentleman of the press. If so I would ask all cabinet, ministers, or any one of them, please to raise their hands, or his hand, or rise so that I shall know with whom I have to deal. No one rises; therefore I must be an implacable friend, if the word can be used in that way.

SERVICE BETWEEN POINT TUPPER AND INVERNESS 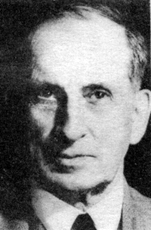 I should like to ask a question of the Minister of Transport. Has the railway service between Point Tupper and Inverness been restored to its daily schedule? If not, has action been taken to have this effected at the earliest possible moment?

The railway service between

Point Tupper and Inverness was reduced to a service of three days, by order of the transport controller. The hon. member has suggested a means whereby that service might be restored to its original state. I have asked the management of the Canadian National Railways to ascertain whether the hon. member's suggestion can be adopted, but I have not yet received a reply. Just as soon as I do, I shall be glad to inform him.