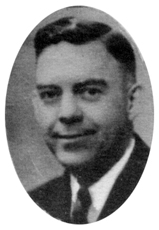 I had a case recently of a young lad who wanted to join the navy, but he could not get in unless he was willing to sign up for seven years.

That has always been the rule with the permanent navy.

He cannot join for the duration of the war.

He can go into the reserve for the duration of the war, but if he wants to enter the permanent navy he must go in for a fixed period. I think it has always been seven or five years.

The young lad I had in mind wanted to get into the navy for the duration of the war.

He should join the naval volunteer reserve.

I am given to understand that he could not join the R.C.N.V.R., that he would have to sign up with the R.C.N. there being no vacancies in the volunteer force. I should like to know if men are being

taken into the R.C.N.V.R., and, if so, are allotments being made to the different sections of the country?

There are only 500 a month to be taken in and when that is divided up among twenty divisions, it gives only twenty-five a month per division, which is less than one a day. That is a small number for each division. Then a division might have a considerable surplus on hand so that recruiting might be quite slack. The allotment of 500 is divided as evenly as possible from one coast to the other.

I am sure that all members of the committee were impressed with the recital of the Minister of National Defence for Naval Services, and I know we are all in accord with the words of appreciation expressed by the hon. member for Yale with regard to the [DOT]wonderful achievements of the Canadian navy. There is one matter in which I am particularly interested and on which the minister did not touch. I refer to the future policy with regard to repairs to naval ships.

As the minister well knows we have an exceptionally fine dockyard at Halifax. The facilities of this yard have been extended to a great extent and it is now able to take care of the great majority of the ships. Those of us who live on the Atlantic coast see the ships sailing in and out of Halifax and we see also the large number of naval ships coming to port for repairs. I am wondering if any policy has been set out in regard to the development and carrying on of repair work during the post-war period, particularly the repairing of naval ships.

I can remember back in 1924 and for many years afterward trying to impress various ministers of defence, particularly the late E. M. Macdonald, that we had at the port of Halifax a very fine dockyard, well equipped to carry out all repairs. At that time most of these repairs were being handled by outside concerns, and I always felt that we should maintain a sufficiently large permanent force to take care of all the repairs necessary to Royal Canadian Navy ships.

Is my hon. friend referring to the naval dockyard, or to repair facilities generally in the port?

I am referring to the Halifax

dockyard and its ability to take care of ships of the Royal Canadian Navy.

ways on the south shore of Nova Seotia, at Sydney, in Cape Breton, Pictou and other points. I would hope that the hon. gentleman is not too optimistic when he sees some problem about repairs in the post-war period. The problem in the past has been to get something to repair. However, I think he is quite right in asking that we should follow the practice which is fairly commonly followed in Great Britain, that is, to have a good deal of the repairs done in the naval dockyard. My only hope is that the navy will be large enough to present some problem in that regard.

You have a good yard there; there are facilities and men available, but you lack a dock large enough to take care of warships, both in the Royal Navy and in our own navy. I am suggesting that you should plan things so that, instead of our warships and British warships being sent to the southern states for repairs, this work could be done in our base Atlantic port, namely, Halifax.

Mr. MACDONALD (Kingston City); I see more clearly what my hon. friend is suggesting. He will remember that we have established a floating dock at Halifax capable of taking ships up to 25,000 tons, which means anything short of a battleship. Anything in the line of a cruiser, a destroyer, a frigate, a corvette or a minesweeper could easily be handled in that harbour. Ships larger than that, such as battleships, could be repaired in Saint John where there is a large graving dock capable of taking any ship in the world. I thoroughly agree that we should have in Canada facilities for the repair of our own ships and the ships of any other friendly nation which may be in distress, no matter how large they may be. We should have docks and repair facilities large enough to deal with this problem and I hope we shall be able to maintain and perfect them as time goes on.

I do not wish to prolong this debate, but I fear that there may be too great centralization in the post-war period. I hope the minister and his officials will not forget-the minister has made reference to this-that there are establishments not only at Halifax and Saint John but at other places. These establishments have the personnel, the equipment and the machine capacity to take care of all repairs. These yards have served their purpose for the present time and I think the time will come *when you will need them. At least they should be kept in good condition and kept operating when at all possible.

What personnel is now in training at Deep Brook, and what staff is there at the same place?

The total number of personnel at Deep Brook is 6,917, roughly 7,000. How many of these are staff, instructors, and the like I cannot say, but I will get the details for my hon. friend to-morrow.

What is the policy of the government with regard to building the larger warships? I realize that some destroyers are being built at Halifax. Is it planned that all destroyers for the Canadian navy in the future are to be built in Canada? And what about cruisers? I have here a press dispatch of October 17, 1944, in which Mr. Edmond Sharp, a shipbuilding expert who was sent over from Great Britain to help in the building of destroyers at Halifax, is quoted as saying:

It will be a great disappointment to me personally if Canada does not continue with the construction of destroyers.

And he added that cruisers, too, were well within the scope of Canadian shipyards. I think it would be interesting to the house and to the country to know just what the plan? are.

With regard to the building of these larger ships, last year there was a brief submitted to the government by the Canadian Shipbuilding and Ship Repairing association in which certain recommendations were made having in mind the maintenance of a shipbuilding industry in Canada in the post-war years. One of the recommendations read as follows:

That all Canadian naval vessels shall be built in Canada, and that the government make representations to the British government to etsablish a policy whereby educational orders for British naval vessels may be placed in Canada in the post-war period.

Will the minister make a statement with regard to the attitude of the government toward that recommendation of the Canadian Shipbuilding and Ship Repairing association?

We have no plan in mind for the post-war building of destroyers. We have certain destroyers now in hand in Canada, namely four Tribal class destroyers. Beyond that we have not planned for the future. There is no reason whatever in my judgment why Canada should not build its own destroyers and its own cruisers too, if necessary. It can be done. One of the destroyers built at Halifax will, in a matter of a few months, be in commission. Work on this ship has been delayed for some time, though no fault can be attributed to anyone. Destroyer construction was new work for this

Is that the first Canadian-built destroyer to be.put into commission?

Mr, MACDONALD (Kingston City): She is not yet in commission but will be in a few months.