I cannot see the minister's face; I am looking at the hon. member opposite, and by his looks he is very much discouraged.

The Minister of Finance looks happy.

I should like to say a few words in support of the hon. member for Huron North, who argued for the abolition of the sales tax.

I do not like to interrupt the hon. member but we are on the income tax, not on the sales tax. The committee will agree that wide latitude has so far been allowed in this discussion ,and I must ask hon. members to confine their remarks to the resolution before the committee.

Nothing would give me more pain, Mr. Chairman, than to disregard your ruling; I shall confine my remarks to the resolution before the committee. But what I was going to say is, I believe, pertinent to the resolution which is to help industry. If industry is to flourish, customers are required for the products of industry. I represent the industry of agriculture, with its 780,000 farms across this dominion. When one sees the equipment in some of those farm homes he realizes the great need for the products of industry, which this resolution is designed to stimulate. If a reduction in income tax will help industry, would it not be a good thing to reduce the tax on consumption so that our farmers could purchase the house equipment they badly need?

Will my hon. friend name one item which the farmer, as distinct from another citizen, uses directly in the production of his product and which now pays sales tax? I am getting out of order myself, Mr. Chairman.

I quite agree with the minister, and the only point on which I disagree with him is that in practice the farmers have not been able to purchase their requirements.

Taking the sales tax off would not help them-not when it is already off.

Gasoline for agriculturists is exempt from tax.

That is not a federal tax.

No-true. But the hydroelectric commission of Ontario will give a rebate on the purchase of certain electrical

equipment for use in kitchens; and also there is what amounts to a subsidy in connection with some farm equipment-they will

subsidize the construction of rural lines to stimulate the purchase and installation of such equipment. There is no reason why the federal government should not make some contribution to the elevation of the standard of living of farm homes. If that were done,

I believe that the hon. member who sits in the opposite corner would not have the opportunity to wax eloquent about the poverty, degradation and distress of people who live in the cities. High standards of living in the city have been a magnetic attraction to young men and women on the farms, inducing them to go to the urban areas where living is easier and one can enjoy the fruits of science, industry and invention.

I am sorry, Mr. Chairman.

I did not want to get away from the subject, but after all there should be some way of discussing this phase of the matter a little more fully. If this move for the assistance of industry is a success, possibly in another year's time there will be an extension of some of its principles to agriculture. To exempt farmers from income tax would be a paradox, because no farmer has an income large enough to qualify him for income tax. He should be exempted from sales tax: thus he would be enabled to share in the benefits accorded to other classes of society. 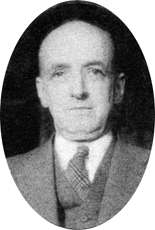 I desire to correct a statement made by the Minister of Finance. It was, I know, quite inadvertent. In my speech the other day I said this:

Would it not be better to lower the sales tax and increase demand?

That does not mean, to abolish it.

If the sales tax could be removed and the sum now absorbed by that tax were used in the purchases of commodities, this would increase the demand for commodities.

That is, I was suggesting what would result from the complete removal of the sales tax.

That is what I replied to.

But my hon. friend did not quote the qualifying sentence which followed that. I simply presented a broad outline of what would happen economically from the removal of the sales tax, and I naturally implied that my hon. friend, who is a greater expert in figures than perhaps any other man in the house-

-would be able to divide the total of the loss, that is, divide 126 by 8, and thereby obtain the effect of a one per cent reduction, and apply it. I went on to say this:

I fancy that the answer of the Minister of Finance . . . will be, quite clearly and reasonably, that we need the revenue. That is obvious; but at least a start could be made.

That is all. My hon. friend gave this as coming from me:

I have no criticism to make of his theory, but it would be a bold Minister of Finance who would to-day propose the abolition of $120,000,000 to $130,000,000 of revenue in the belief that, filtering through in some way, some of it would come back.

I did not make that suggestion, and the minister should not have quoted me to that effect.

I think the minister's predominant purpose is to emphasize the face that the object of this resolution is the relief of unemployment. But it seems to me that there are going to be complications entering into one's income tax return, particularly in so far as it relates to real estate, or rather to buildings, because in making his income tax return one must differentiate between repairs and capital expenditure. The department is emphatic in that regard. For instance, if one repairs a roof, that goes into "repairs", but if he finds that the building needs a new roof, it is capital expenditure; likewise with regard to the laying of a concrete floor. Does the minister not think there will be a lot of complications in connection with real estate? Because, in relation to these expenditures, the man who has his investment in a building is not far removed from the man who makes his investment in a small industry.

No distinction in that

regard is being made which does not now exist. In making up the income tax return to-day, there must be a distinction between capital and repairs and betterments. The same distinction will have to be made, but there will be no difference in that regard at all. Of course only those expenditures which are of a capital character can qualify under this legislation. But there will be no additional complication in the income tax return itself.