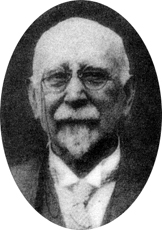 A question of privilege!

-I am deeply appreciative of your courtesy in permitting me to say a few words of thanks to hon. gentlemen who have greeted me this afternoon, for their goodwill, and particularly to the members of the party to which I belong for this gift of beautiful roses.

To-day I end my eighty-third and begin my eighty-fourth year. It is an old age, at least the sixth of Shakespeare's seven ages. I am reminded of that fact when I recall that it was fifty-seven years ago that I attended my first session in this House of Commons. I was then, in the words of Disraeli, a gentleman of the press, and had no other escutcheon, sitting in the gallery of the fourth estate, commenting upon the proceedings of parliament. That work I carried on for seven consecutive sessions, until, in 1888, succeeding my father, I was elected to sit in this chamber. It is, if I may be forgiven for mentioning it, an example of that bonne entente which should prevail among all classes and all provinces that for seventeen consecutive years two persons resident in the city of Montreal in the good old province of Quebec have represented in the House of Commons a constituency in the heart of the province of Ontario, twenty to forty miles north of the city of Toronto.

Parliament in 1882 enabled me to see in the flesh and to become personally acquainted with many of the members of the parliament of 1878. It is an evidence of the brevity of life and the swift passing of time that, of the men who were in the House of Commons when I first entered it, one only in all Canada other than myself survives-I refer to that distinguished citizen known as the grand old man of Ontario, Sir William Mulock. It has so happened that, of the eleven prime ministers Canada has known since confederation, I have sat in parliament with ten-Sir John A. Macdonald, Hon. Alexander Mackenzie, Sir John Abbott, Sir John Thompson, Sir Mackenzie Bowell, Sir Charles Tupper, Sir Wilfrid Laurier, Right Hon. Arthur Meighen, Right Hon. R. B. Bennett, and the right hon. gentleman (Mr. Mackenzie King) who at

present rides the whirlwind and directs the storm. If I could apply to myself the lines of Henley-

I am the master of my fate;

I am the captain of my soul.

-I would choose to sit in parliament under the twelfth prime minister, the present leader of the opposition (Mr. Manion).

I have received at the hands of hon. gentlemen many kindnesses and expressions of goodwill, which encourage me to hope that I may have something of "that which should accompany old age-honour, love, obedience, troops of friends;" aye, Mr. Speaker, troops of friends, the very salt and savour of life, without whom existence would be bleak and barren indeed.

So once more I give you all my thanks and the assurance of that abiding gratitude so finely expressed as "the memory of the heart."

May I say to the hon. member for St. Antoine-Westmount (Mr. White) that it would be difficult to find words wherewith to give expression to the appreciation with which all hon. members of this house have listened to the remarks which he has just made. Nor would it be possible to express to him too sincerely the feelings we share towards him on this, his eighty-third birthday anniversary. I believe we are all proud that it has been our privilege to be present in this chamber this afternoon to listen to one who has played such an important part in the public life of the country speaking to members of this House of Commons as he has out of his wealth of an exceptional experience as well as years. We are grateful that his remarks have been taken down by Hansard that they may become for others as well as ourselves a permanent record of one of the most pleasing incidents ever witnessed in the House of Commons of Canada.

My hon. friend has said that if he were expressing what he would like most for himself, it would be that he might have honour, love, obedience and troops of friends. May I say to him that he has all four in abundance from those who sit with him in this house.

He has observed how rapidly time is fleeting. All of us in these days, I think, are impressed above all else by the rapidity with which many of those who have been most familiar figures in the public life of our country are passing away. There are very few links left in the dominion between the Canada of to-day and the Canada of confederation. My hon. friend is one of them- one of them of whom all Canada is proud,

I might say much more to my hon. friend; it would be mostly expressing what we all wish for him. I join in every wish that he has uttered except one-

I did not say when.

As my colleague, the Minister of Finance (Mr. Dunning), has just remarked to me, even at that I wish him long life. I do wish him that most sincerely and with it the strength needed to support his years. I hope it may be my privilege year after year, from this side, for many years to come to renew the congratulations which I am extending to him to-day.

After the little masterpiece delivered by my very dear old friend, whom I delight to call Sir Robert White, I am afraid that any remarks of mine would be somewhat of an anti-climax, particularly following the very graceful tribute paid the hon. member by the Prime Minister (Mr. Mackenzie King). At the same time, I think I should be remiss in my duty if I did not say just a word to echo the sentiments of the Prime Minister in everything that he has said-except one. I join with the right hon. gentleman in expressing, for myself and on behalf of those with whom I am associated, the affection which we all feel for this "noblest Roman of them all," the old and distinguished member for St. Antoine-Westmount, who sits to my right-or rather who has honoured me by sitting to my right.

Perhaps I might take the liberty, something that is not often done, of associating with Mr. White his very charming lady, who sits looking down at him from the gallery, in this expression of our affection for him. I think I can assure him of the affection of the whole house both for himself and for her. I might say now something I said at a luncheon which our party gave to our distinguished friend from St. Antoine-Westmount an hour or two ago in the parliamentary restaurant-and I said it in the teeth of my whole party-that of all my followers there is none whose advice and counsel I value quite so highly as I do the advice and counsel of Mr. White.

I heartily echo the wishes of the Prime Minister for a long life of happiness for both Mr. and Mrs. White. I know that I am expressing the hope of all members of my party

and, I am sure, the hope of the Prime Minister and his followers, when I say that we should all like to have the honour, for many years to come, of associating in this chamber with the hon. member for St. Antoine-Westmount.

Mr. Speaker, may I, on behalf of my fellow-members from the province of Quebec, associate myself with the tributes of regard and affection which have just been paid to the hon. member for St. Antoine-Westmount (Mr. White), whom we consider as one of us and of whom we are proud. Mr. White is a living example of the characteristics which should distinguish the true Canadian-broadness of mind, tolerance, moderation, generosity in his relations with all his fellow-citizens. I wish him many more years of life. Again, on behalf of my Frenchspeaking fellow-members from the province of Quebec, I say to him that we are happy to salute him here as one of us.

There is really nothing anyone can add to what has already been said, but we in this corner should like to join with the others in our meed of appreciation of the services of our friend Mr. White. At this particular time there are no opposition parties whatever, and I am sure that for once, at least, we are all in entire accord.

I am sure no words from a member as humble as I am could possibly add anything to what has been said by those who have preceded me to-day; nevertheless I think I have a special privilege inasmuch as on various occasions I have been associated with the hon. member for St. Antoine-Westmount, he being the oldest member of the House of Commons and I the youngest. The only possible tribute I could pay to the hon. gentleman is to say that when later on I have occasion to look back over my past, I trust that my political record will be as happy and as honest a record as that of my hon. friend.

Mr. ALPHONSE FOURNIER (Hull) presented the first report of the special committee to inquire into the operation of the Civil Service Act, and moved that the report be concurred in. Motion agreed to.

1. How many cream separators were imported into Canada from Sweden in 1938?

2. What was the rate of duty imposed?

3. Does the new trade treaty with the United States affect the duty on Swedish cream separators imported into Canada?

4. Under the Canada-United States trade agreement, effective January 1, 1939, cream separators are dutiable at 12J per cent ad valorem. Sweden, being a most favoured nation, enjoys the benefits of this trade agreement.

1. Has the government given approval to the proposal that ex-service men be registered for national service?

2. Will the government accept the records compiled as a result of the survey to be made of ex-service men?

3. If so, for what purposes will the information be utilized, and by what department?

4. Are there conditions that warrant any partial registration for national service?

5. Will further steps be taken to undertake registration of all citizens?