Yes, but there is a limited section of wharf at which they can load. There is ample justification for the development of Rimouski; there is no doubt the traffic is there, and the present facilities are quite inadequate.

What length of wharf

will this construct, and how far out into the road? To what extent will this add wharfage facilities?

The idea is to develop

the inside section of the harbour, about one thousand feet, to give berthing facilities to three or four ships.

Does this involve dredging?

A certain amount of dredging.

Would there be some

revenue from the traffic over this wharf?

I know that revenue is

collected not by the minister's department, but by the Department of Marine.

Has the minister any

information as to the amount of revenue? .

No, I cannot say. The

revenues of this harbour, as well as those of Sorel harbour, and others, are collected by the Department of Marine, according to a schedule of fixed rates for wharfage dues in the harbour. There is a schedule which applies to all harbours that are not governed or directed by the harbour commissioners. 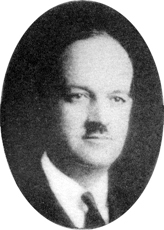 would be the annual traffic over the Chambly canal?

I cannot say what the

But the Chambly canal

is only six or seven feet, is it not?

At present it is six, but

most of the time during the summer season it is only five and a half feet. At one time the St. Lawrence canals had the same depth.

At one time there was

no canal there at all.

I want to ask the minister this: Does he not think he should reconsider this item? I put the situation to him fairly, and then I am through. First of all he asks for $60,000 for a breakwater at

Matane, and he will bell me, no doubt, that that is another north shore harbour which has to be looked after and, I suppose, is very important. Then we come to the next one, a vote of S46.000 for Paspebiac wharf, and then a vote of half a million dollars for improvements in the Richelieu river, just an earnest for $8,000,000. Does it not look like the Montreal harbour bridge? There are 88,000,000 in sight, and that means $10,000,000. To use the language so familiar to some of my hon. friends the ante is a half a million, that is all. Is that quite fair to Canada at this time?

Then, the next one is a vote of $150,000 for harbour improvements at Rimouski. All along the coast of New Brunswick and Nova Scotia in years gone by ships used to lie in the roads and loaded with deals from scows.

. They did not expect to have a wharf at every door. Rimouski has had $100,000 spent on it during the last two years for purposes of providing it with wharf accommodation facilities for schooners and smaller vessels, and if ooean-going steamers come to take deals there is no reason why they should not do what is done, for instance, at Ha! Ha! bay, namely load from scows or barges where there is not sufficient wharfage accommodation.

Coming to the next item we find an expenditure of $75,000 for a contribution towards dredging at Riviere dies Hurons, the balance of the cost to be borne by the province. If the dominion is getting half in this case, why is it not getting half on a dyke being put up at Laprairie? That work stands in the same position. Having regard to the claims made so successfully by the province with respect to waters, as distinguished from navigation-property in the waters-why should we have half paid by the province in this item, when we have not in other cases?

Then we turn to dredging in the St. Maurice river. I can understand that dredging must be done there, because Three Rivers is an important port connected with the shipment of paper to various countries of the world. But we come next to a vote of $200,000 for dredging in the Saguenay river, which serves no purpose unless a still larger sum is expended. That is, the expenditure of $200,000 must be followed by another expenditure perhaps as large, or perhaps much larger, because, as a report of engineers indicates, the silt and sand will fill in during a winter to the extent it has been taken out in the preceding summer. It is one of the finest dredging contracts in the world.

The next item is an expenditure of $85,000 for Sorel harbour improvements. I have

every sympathy with the minister's love of his native community. Sorel is a port at the mouth of the Richelieu river, is it not?

M,r. BENNETT: That is another Richelieu expenditure. There is already an item in the main estimates, which the minister tells me is not to be regarded as being too closely connected with this one. But is it not desirable to consider whether or not we should move at this time in connection with projects involving large expenditures? You see $10,000,000 is involved in these expenditures, and $10,000,000 becomes a matter of great importance to the Minister of Finance and to the people of Canada at this time. Can we afford to do it? I suppose most hon. members are familiar with the statement not long since of a very famous American. He said, "We must make up our minds there are many things that we want that under the present system we cannot have, unless we are prepared to destroy the system." Then we would not have it. I put these facts to the minister, and I do not wish to urge the matter further. I do suggest, however, that he should give the matter the most careful consideration and should consider whether or not the item could be revised.

This item does call for careful consideration, and without anticipating something which is not yet before the committee could he not consider whether the government is warranted in spending the large sum of $180,000 at the port of Port Arthur for harbour improvements? On one occasion I went over that work with great care, to satisfy myself about it, and I shall make special reference to it when the item is under discussion. However, I do ask the minister to give careful consideration to that phase of the matter.

I think it is universally

agreed in Canada that the best method of combating unemployment is to make expenditures which are considered justifiable. It is believed to be much better to make those expenditures for useful purposes, although all the benefits may not be derived in the first year, than to give money for direct relief or for the maintenance of relief camps. We have spent on these relief proposals-they were necessary; I do not dispute it-millions upon millions which have been profitless. We have not received any returns, and we eanot get any. Although in certain cases the justification for the expenditures indicated in these estimates -may be disputed, there can be no doubt that they are works which from a certain point of view can be considered justifiable.

The development of our railways, our highways and our waterways have the same object in view, namely the development of Canadian trade. It is with that object in, view that we have felt it desirable to place these amounts in the estimates. Although it may be said, "Well, now, let us wait another year," we must remember that those who are in need of the opportunity to earn money cannot wait another year. It is better to provide works so that they may earn their daily bread than to hand them the dole in its most offensive form.