Bill No. 9, to incorporate The Bishop of the Arctic.-Mr. Geary. Bill No. 10, respecting a certain patent owned by The Firth-Brearley Stainless Steel Syndicate Limited.-Mr. Kennedy (Winnipeg). FLOOD AT VAUDREUIL SOULANGES On the orders of the day: 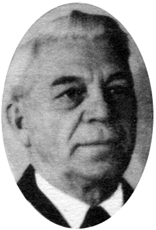 wish to put a question to the hon. Minister of Marine (Mr. Duranleau). I have received communications from Vaudreuil to the effect that a considerable flood has occurred along the Ottawa river in the parishes of St. Michel de Vaudreuil and Ste. Jeanne-de-Chantel, Perrot island. A large number of people have had to leave their homes, and farmer's flocks should be transferred elsewhere. I request the hon. Minister of Marine, to send, without further delay, engineers from his department to relieve the situation brought on by the accumulation of ice on the lake at Pointe Cascades. This flood is spreading and will be the cause of considerable losses in that district. I therefore beg the hon. minister to send engineers to that district without further delay.

I have noted the statement of the hon. member and I shall take steps to relieve, as soon as possible, the situation caused by this flood.

On the orders of the day: Mr. P. F. CA8GRAIN (Charlevoix-Sague-nay): On May 16 last I directed a question to the hon. Minister of Labour (Mr. Gordon) with reference to the Agriculture Committee's report on the milk inquiry, and the answer at that time was, "The report will be reviewed, and of course if action is necessary it will be taken." I do not see the Minister of Labour in his seat but in his absence perhaps the right hon. the Prime Minister would be able to say if that report has yet been reviewed, and if any action is contemplated in the matter.

The hon. gentleman s question will stand as a notice.

Mr. Speaker, I rise to a question of privilege, one which I think concerns the rights of every member of this house. Yesterday, under the authority of standing order 44, rule 339, I addressed three questions to the hon. Minister of National Revenue (Mr. Matthews). The record will be found at page 368 of yesterday's Hansard, at the foot of the page. I asked: What was the tonnage of coal imported into British Columbia from the United Kingdom during the calendar year 1933?

At ports where importations of any particular commodity were few the private business of individuals or concerns would be disclosed if such information were given, and this would be contrary to established practice.

I respectfully submit, sir, that that is not correct. In the first place, the consignment was not a single one but a number, and comprised a large quantity, 22,000 tons of coal, which would represent in car lots, 1,100 car-

loads. It was not one consignment but was scattered over the whole year. It was not simply from one concern; it was from more than one. Moreover, the information I asked for would have revealed nothing whatever about the importers' private business. Had the minister replied that a dumping duty of three or four dollars a ton had been collected, it would not have revealed anything about the amount paid for the coal in the country of origin, or the price got for the coal when exported-

The hon. gentleman has

had an answer to his question.

It is not in order to

discuss it. There is no motion before the house. The question has been asked and answered, and if the hon. member wants further information he can ask further questions, but it is not in order to proceed in this way.

I cannot ask further questions dealing with a matter already on the order paper. I am asking the minister if he will bring down that information.

I call the hon. member

If I am not to be allowed

to state a question of privilege, Mr. Speaker, then I appeal from your ruling that I cannot do so.

State it at the proper

time, but not now.

I appeal from your ruling,

Mr. Speaker, that I am not to be allowed to state a question of privilege.

There is no such ruing.